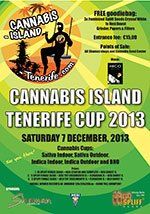 After filling 500 goodiebags for the Cannabis Cup with a 3-pack of Spliff Seeds Crystal White, one bottle of Hesi Boost, a grinder, filtertips and rolling papers; Saturday the 7 december was just around the corner. Our first Cannabis Cup 2013 as sponsor. It was time for the first edition of the Cannabis Cup: the Cannabis Island Tenerife Cup hosted by the Shaman shops. This Cannabis Cup would take place from 14.00 til midnight and was held at a beautiful location. In the courtyard of a finca (stately farm), near the Airport Tenerife Sur. In the courtyard there was a podium for music and the ceremony, a mojito bar and numerous stands. Stands where you could obtain information on a great number of things, buy products, watch a BHO extraction demonstration and sample your own product in the vapor and bong lounge. The food was great and drinks were bountiful. It was also amazingly cheap for food and drinks.

Saturday December 7th, The Day Of The Tenerife Cannabis Cup

It was gorgeous weather on the day of the Cannabis Cup. Temperature was around 26 degrees, there was a big crowd and the atmosphere was chilled out. Everyone was visibly enjoying themselves, the music, the people, the beautiful surroundings and mary. We entered all categories of the Cup and were nervously awaiting the results. Our Cup entries were; Blue Berry (BHO Cup= honey bee extraction), Blue Berry (Indica Indoor Cup), Mega Power Plant (Indica Outdoor Cup), Sweet ‘n Sour Indoor (Sativa Indoor Cup) and Sweet ‘n Sour Outdoor (Sativa Outdoor Cup).

The Cannabis Cup 2013 Results show would initially start at 22.00, but had to be pushed forward to 20.30 because of torrential rain. The ceremony for the announcement of the Cannabis Cup Winners 2013 was moved to a very cramped room indoor, which filled to the rafters with Cannabis lovers. This resulted in a very (typical Spanish style) chaotic, but buzzing ceremony. We stood outside by the door listening in on who had won which category. And yes, we nailed it! Becoming a Cannabis Cup Winner twice a first prize for our Blue Berry in the BHO Cup, thanks to Chris. And our own grow, the Sweet ‘n Sour Indoor also received a unanimous first price in the Sativa Indoor category. As you can understand the Spliff Crew and all who supported us were ecstatic! And smoked a big, celebratory spliff to celebrate!

Conclusion; very well perceived Cannabis Cup and a second edition for sure

All in all it was a very memorable and successful Cannabis Cup in Tenerife. Shaman, the organizer, has said that they will for sure hold another Cannabis Cup for next year. So if you want a sunny break in December and attend an amazing cup keep checking the Cannabis Cup website regularly or watch the facebook pagina van Cannabis Island Tenerife and ‘Ven a Tenerife!’ (Come to Tenerife!)