In this video you see a group of young American soldiers smoking cannabis together, “shotgunning” smoke through the barrel of an M1 Garand rifle. U.S. troops were involved in the Vietnam war between 1962 and 1973, bringing over 200,000 troops to the country at the peak of U.S. involvement. During this time military personnel looked for an escape from the madness of war and ended up finding solace in pungent, landrace Vietnamese Sativa. Between 1967 and 1971, at the height of American deployment, as much as 34% of soldiers are thought to have been introduced to the cannabis plant.

The use of cannabis was not appreciated by commanding officers, but was more tolerable than the alternatives. While punishable by law, cannabis use was often ignored by leaders to keep their men mellow and focused, as well as defuse social tension in the group. The other drugs of choice, alcohol and heroin, are much more debilitating. Later on, widespread cannabis use helped form the pacifist movement within the military that helped end the Vietnam War altogether. 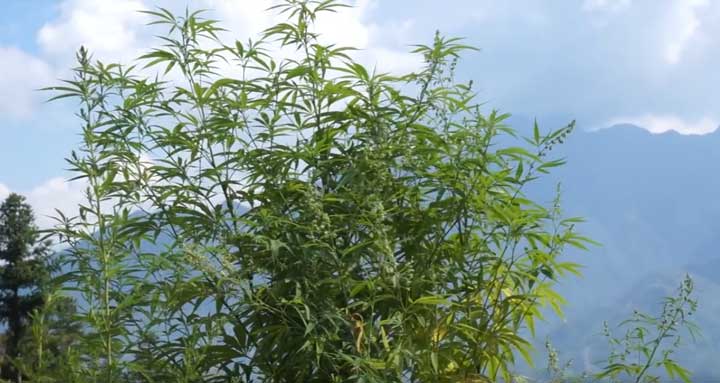 The picture above shows a classic landrace Vietnamese sativa in the Hoàng Liên Son Mountains of northwestern Vietnam. Her tall and lanky nature make her a difficult strain for indoor cultivation, but even worse is her flowering time: up to 26 weeks! Vietnamese Sativa is very similar to landrace Thai strains that have been popular for decades. This insanely long flowering period is also the reason our Royal Thai regular seed line is a cross with Skunk #1, bringing the 20+ week flowering time down to about 12.

All in all cannabis played a significant role in the Vietnam War, and is one of the few good things that troops brought back home. As cannabis enthousiasts that try to look on the bright side, we’re glad we had a chance to become familiar with the beautiful cannabis strains South-East Asia has to offer!!!